Captain Marquinhos led the French champion in a dominant first half on Wednesday, but the hosts ultimately lost the first leg 2-1 after surrendering in the second half.

City, who were poor in the first half, managed the draw thanks to a lucky goal from Kevin De Bruyne and a free kick from Riyad Mahrez who sort of wiggled through the wall.

PSG also sent off midfielder Idrissa Gueye after a reckless lung on Ilkay Gundogan in the 77th minute.

“I have to say that in the second half, PSG were protective and no longer progressive,” said Wenger, appearing as an expert on beIN SPORTS. “Is it because they weren’t physically capable?”

“After 1-1 they fell apart completely. They got emotional and aggressive in a stupid way.”

Both teams, heavily supported by wealthy owners, are battling for their first Champions League title.

City are also flying domestically and appear certain to be crowned Premier League champions in the coming weeks, while PSG face surprisingly stiff competition in an intriguing Ligue 1 title race.

“What was interesting was you could see that when he was 1-1 PSG had a mental breakdown,” Wenger added, highlighting PSG’s uneven national form.

“This is the consequence of the team’s loss of eight games in the league. It has an impact.

“When it’s 1-1, the team knows they’ve lost a lot of games, they wear that. It’s not like the season before, when they were unbeatable in the league.

“You could see the confidence drastically dropped and the mental impact when Man City equalized for the Champions League semi-final was too big.”

PSG manager Mauricio Pochettino admitted his side struggled in the second half as Manchester City started to win in the game.

The counterattack, used so brilliantly by PSG in the quarter-finals against Bayern Munich, was stifled by City’s quality on and off the ball.

“There were two halves. In the first half we did well. We created chances and deserved the lead, but in the second half they were better than us,” Pochettino said after the game.

“Both goals were accidents, but they created more than us.”

Both teams will be aware that the tie is far from over before the second leg in Manchester on May 4.

The French side will need Neymar and Kylian Mbappe to improve their performances, with both forwards being very calm for much of the game.

Mbappe, considered one of the best strikers in world football, failed to register a single shot on target throughout the game. 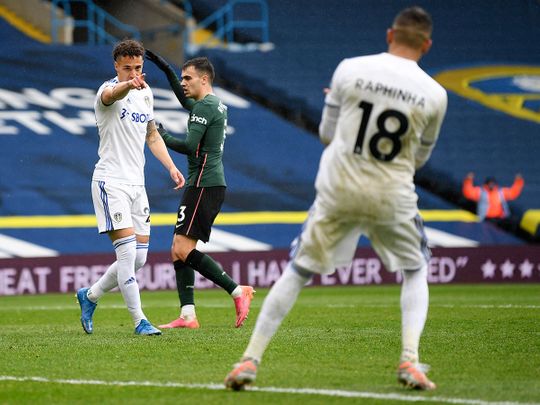