What a difference a year makes! This year the Cong-Galway sailing race was a very different affair from last year in many ways – the timing, the weather, the wind and a new holder for the coveted title.

Bright sunshine and a gentle northeast breeze greeted the competitors as they prepared to take off from Lisloughrey Pier at the northern tip of Lough Corrib. With three-row champion Yannick Lemonnier unable to race following an unfortunate dismasting on his way back from races in Brittany, a new champion was guaranteed, and speculation was rife as to who the likely contenders would be. Unlike last year, when the boats were rocked by wind and rain as they approached the start line, this year’s participants had the chance to relax and take in the beautiful lake scenery. upper and the imposing building of Ashford Castle as they prepared to begin. There was a bumper with 37 boats crossing the start line under the watchful eye of race marshals David Vinnell and Aoife Lyons. The main fleet consisted of 31 catamarans and racing gear sailing under the Portsmouth Yardstick handicap system, while for the first time in several years there was a fleet of six cruisers including two traditional Galway Hooker Sailing gleoiteogs Club. In order to ensure a windward start, the boats set off towards Cong from the start line, before rounding the windward mark and accelerating south towards Kilbeg. 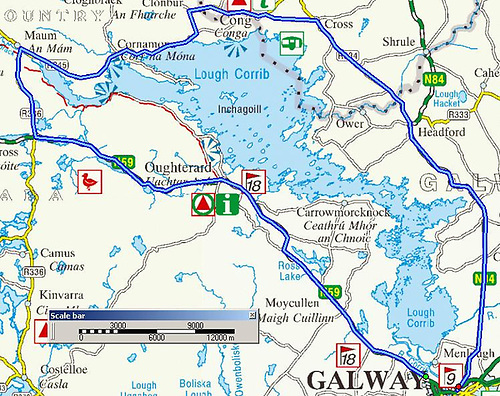 With the wind behind them for most of the race, the crews tried to keep all the webs available in the air. This suited more traditional designs, including fireballs and the 420s, which made impressive progress under symmetrical spinnakers. Unlike last year when catamarans reigned, the leading positions at the end of the first stage were dominated by monohulls. Despite the pleasant conditions, the crews managed to build up their appetites by the time they arrived at Kilbeg Pier, outside Headford, where GCSC provided a delicious lunch. After recovering energy, the boats got off to a quick start downwind in the narrow sections for the second leg. However, with the wind blowing at her back for much of the trip, the narrow ones didn’t feel as narrow as in previous years when the boats were flapping in a strong breeze. 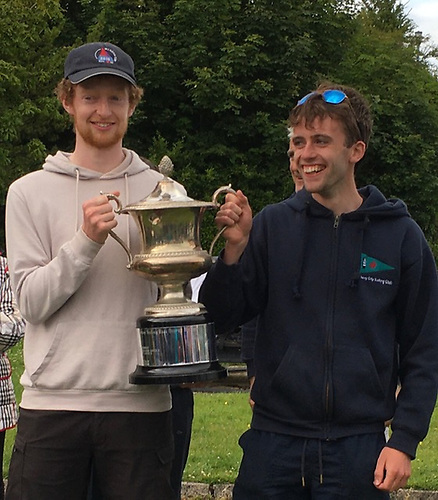 The trip across the Lower Lake was swift and while Tim Breen’s Formula 18 catamaran was ahead, it was the Fireballs, Lasers and 420s that paved the way for a time-adjusted as they entered the sheltered limits of the lower lake. Here, frustration subsided as crews meandered side to side in search of every breath of fresh air that could be found for the final push towards the finish line at Corrib Village, cheered on by spectators noisy shores. Once the line was crossed, there was the last capsize which made the crowd happy to get things done under the Quincentenaire Bridge as the bigger boats lowered their masts and switched to engines and oars.

Back on dry land, the math began as competitors enjoyed alfresco dining at CRYC, compliments of McHugh Properties. Once the calculations were complete, the big winners of the main dinghy fleet were Rob Talbot of GCSC and Rian De Bairéid of CSS in a 420, which earned a luxurious stay in the Lodge at Ashford Castle.

As Afloat reported earlier, second place went to Frank Miller and Imail Inan in a fireball, while Damian Lord brought his laser home in third. The winner of the cruiser fleet was Ed Butler in his Drascombe Lugger “Egret” while Tina Concannon and her crew had the first Hookers to cross the line in “An Lon Dubh”.

The event involves a huge volunteer effort and the organizers – Galway Bay Sailing Club, Corrib Rowing and Yachting Club, Galway City Sailing Club, Galway Hooker Sailing Club and Cumann Seoltóireacht an Spidéil – would like to thank everyone who contributed both on land and on the water. The race officers and the race committee, the crews of the support boats of all the organizing clubs, the safety officer and the safety team, the beach master’s crew, all those who have been involved in or, the publicity team, transportation and catering social networks have ensured the event’s long tradition, dating back to 1882, continues for another generation of sailors to enjoy. Thanks to the generous sponsorship of McHugh Properties and The Lodge at Ashford Castle, and despite the vagaries of wind and weather that make each year an unpredictable new challenge, the event continues to gain popularity while retaining its idiosyncratic charm.

Many thanks to the five clubs involved Corrib Rowing & Yachting Club, Galway Bay Sailing Club, Club Seoltóireacht Húicéirí na Gaillimhe, Galway City Sailing Club and Cumann Seoltóireacht an Spidéil, RO Team, Beachmaster, Safety Boats, Results Team, lunch supplier, Providers buffets, competitors, without whom this event would not have been such a success. The media to cover the event and our two sponsors The Lodge at Ashford Castle and McHugh Properties.

Naomi Osaka takes on Olga Danilovic in US Open second round