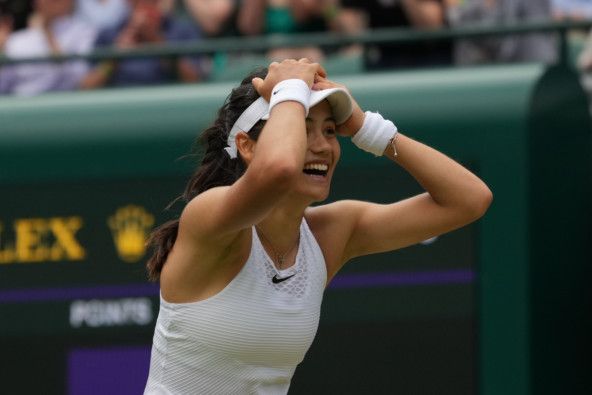 London: Emma Raducanu became the youngest Briton to reach the fourth round of Wimbledon in the Open era.

The 18-year-old wildcard, ranked 338th and fresh out of his A-Levels, converted her third match point to beat veteran Sorana Cirstea 6-3, 7-5 over the No.1. Ground 1. She is playing her first Grand Slam tournament.

Raducanu won eight straight games to take a 3-0 lead in the second set, then struggled to fend off Cirstea. She failed to convert three consecutive break points in the next game, then was shattered and missed five more break points at 4-3.

She needed three more attempts in the last game before Cirstea landed a forehand to end the game.

Deborah Jevans was the oldest youngest British woman to reach the fourth round at Wimbledon at 19 in 1979.

“I didn’t know what my reaction would be, and then it happened. I’m so, so grateful for all the support I got today. It is by far the biggest field I have played on. I think I did pretty well at first, I just tried to keep my cool. When I was packing my bags to enter the bubble, my parents said to me: “Don’t you have too many match kits in your luggage? I think I’ll have to do some laundry tonight. “

Raducanu wants to face Australia’s Ajla Tomljanovic in the round of 16.

India vs England: ECB wrote to ICC on results of fifth canceled test against India (spokesperson)