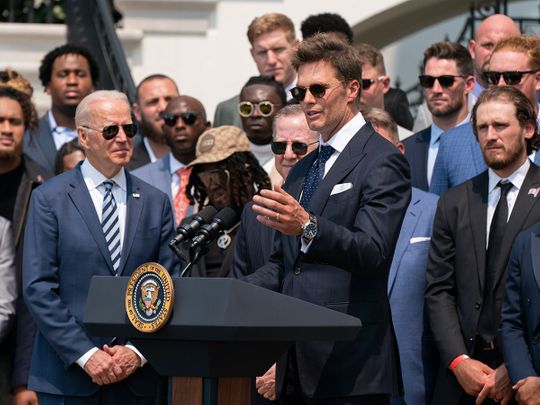 “Not many people think we could have won and in fact I think 40% of people still don’t think we won,” Brady said with a laugh. Standing nearby, Biden rang the bell saying, “I understand that.”

The quarterback added a jibe to the “Sleepy Joe” nickname Trump coined for his opponent during their campaign. “We had a game in Chicago where I forgot what it was,” Brady said. “I lost track of a down in 21 years of playing and they started calling me ‘Sleepy Tom’. Why would they do this to me? “

Brady played in the NFL for over two decades and is the oldest quarterback to lead his team to a championship. He has already won six Super Bowl titles with the New England Patriots before joining Tampa Bay last season.

He made headlines after skipping the Patriots’ 2017 visit to the White House when Trump was in power. He also skipped a visit during Barack Obama’s administration, citing family reasons.

Many athletes skipped ceremonial visits to the White House during the Trump administration.

Trump has repeatedly called the November election results fraudulent, despite statements to the contrary by his own administration officials, numerous audits that confirmed his defeat, and dozens of unsuccessful challenges in federal courts. As recently as July 18, he released a statement repeating the false claim.

Will a faster Ezekiel Elliott mean a better RB?