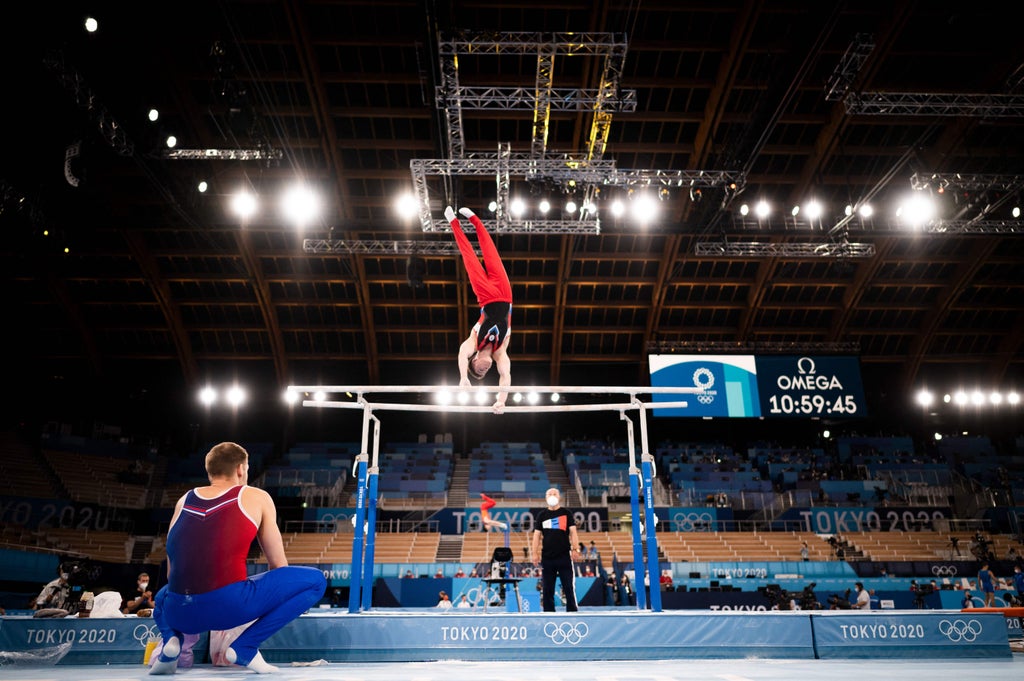 The queue to board our connecting flight from Helsinki to Tokyo was like your own mini Olympic village. A group of Swedish volleyball players stood near the front. A lone British judoka waited behind them. A few Spanish tennis players – no, their bags are too small, do this squash – came to the back of the line late after being immersed in a lively game of Uno. It was Noah’s ark if God was a fan of niche sports.

TV screens above our heads showed news from Tokyo 2020 where organizers were determined to contain the coronavirus. The athletes on our flight would have spent months carefully trying to avoid it, but there was no special privilege. Team GB stars had purchased regular economy seats from the British Olympic Association and any upgrades would have to be funded out of their own pocket. Most of the passengers on the plane took the opportunity to move around empty rows in the back after takeoff.

We were mentally prepared for a delay at Tokyo Harita Airport, given the sheer volume of bureaucracy involved just to get approval for the games and for the flight, enough to help understand why Japan’s vaccination program put a stop to it. as long to be approved. like progressively progressing through the levels of an extremely unsatisfying computer game, moving from one administrative office to another in 20 minutes until you finally reach the big boss at the end: a Covid-19 spit test.

It would be a personal humiliation as my dry, panting mouth couldn’t summon the volume of prop fluid and an unimpressed clinician took me to a side room to be violently dabbed on my nose instead. About an hour later, after a long wait for two more queues for offices to check various documents, there was a nervous delay as two officials discussed my test result in low voices, banging their fingers at the screens. in front of them until they finally give them a piece of paper that says “negative”. As the automatic airport doors open, a puff of hot, sticky air from Tokyo hit me with relief.

Over 24 hours after leaving home, we finally arrived at our hotel near central Tokyo for a three-day quarantine. Whether a full Olympic Games await on the other side still hangs in the balance. Cases continue to emerge among officials, athletes and the media, causing tension and much anger. A journalist was forced into solitary confinement for 14 days – almost all of the Games – after being identified as sitting near someone on his flight who then tested positive.

The rest is uncertain, but the situation must be put into perspective. The numerous cases of athletes are not yet alarming when one considers that there are 11,000 participating in these games. The picture could of course change, and even if Covid is kept in the background by city lockdowns and strict athlete and media bubbles, there will still be significant challenges for organizers to overcome. , from scorching heat to the questionable state of Tokyo Bay. . The Olympics will also miss a crucial ingredient, the spectators, depriving the Games of the atmosphere they deserve. There won’t be any Sweet Caroline or Don’t Take Me Home choruses in the air in Tokyo this summer.

It certainly didn’t feel like you arrived at a booming party, but it’s not a city that shies away from foreign visitors, either. Friendly faces greet you everywhere and even the most unofficial border control staff are always welcoming, managing to be kind and picky at the same time like your favorite grandparent. Whether by accident or on purpose, they express a cautious hope for the fortnight ahead, even if the reality is that most of the locals wanted the games canceled.

Now the Games are here – they’ve already started with football and softball before Friday’s Opening Ceremony – and a vague and perhaps silly idea comes to mind: the sport could eventually steal the show. Even in these sterile times with no crowds to witness the action, there will always be something exciting about the prospect of seeing the best in the world fighting in the flesh. We can’t wait to temporarily get out of our hotel rooms to see it.

Did Bucks find the answer to slow down the Hawks’ Trae Young?