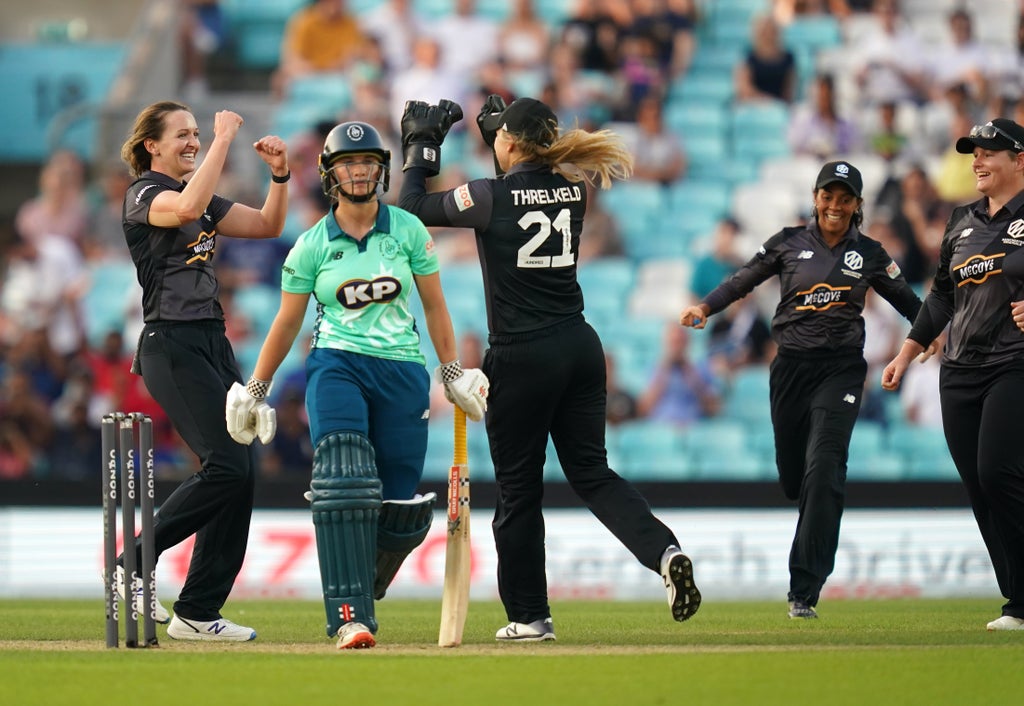 Manchester Originals captain Kate Cross said The Hundred’s opener was an “incredible night for women’s cricket” after the tournament went on a memorable note for all the right reasons at the Kia Oval.

England international Cross found himself in the losing squad after half a century by his counterpart Dane van Niekerk guided Oval Invincibles to a thrilling five-wicket victory after chasing 136 to win with two balls to spare.

Three years after the original idea for this 100-ball tournament was unveiled, it was finally released and even though the first ball was wide on one side of the leg, the contest turned into a run-fest. to the delight of the 7,395 spectators present. presence.

When the England and Wales Cricket Council drew up plans for this unique concept in 2018, equality was a key selling point and the decision to host a women’s match first paid off.

“I don’t think I could come off a cricket ground and be happier with a loss,” Cross admitted.

“It was the most electric atmosphere and I had never played in front of it before. An incredible night for women’s cricket and almost the perfect night apart from the result! “

When Manchester Originals scored 135 for six of their 100 balls, thanks in large part to South African opener Lizelle Lee’s 42, it appeared the visitors would claim a first win from the new competition.

The odds were even greater against Invincibles when Cross picked up two wickets in back-to-back balls, but home skipper Van Niekerk put in 73 for the fifth wicket with his wife Marizanne Kapp before a thick outside edge by the former won the victory for the team based on the oval.

This produced another thunderous reaction from a young crowd, which had wrapped itself up with the chase in the second half of the hosts’ innings.

“Whatever the outcome, we’re story makers, so to enjoy it as much as we did, I think that’s why we feel like we didn’t lose the game. We were the guinea pigs and I’m so glad the tournament went on and we got the night we wanted.

“I felt the atmosphere even when I was in the ring, I couldn’t talk to anyone because it was so strong. I was able to go down to the limit for a few balls so that was good but they went over my head so it looks like a win I don’t feel like we lost this cricket match , it’s a strange feeling. “

Even though this was a new team, the oval crowd immediately lined up behind the Invincibles who got off to a good start as Kapp landed the opening wicket of the inaugural tournament as Emma Lamb was caught by the seventh legitimate ball of the match.

The Originals subsequently recovered with Lee leading the charge, but it was Cross who took the honor in the competition’s first maximum as the visitors drew up 136 for the win.

At 58 for four at the halfway point and with 78 runs needed, it seemed unlikely, but when Kapp broke the ropes thanks to a helping hand from fellow South African Mignon du Preez, a change of momentum s ‘is product to which fans responded with the captain in mind. the home team with two balloons left.

“It was electric and incredible, an experience to be felt and I think the crowd carried us to the back,” insisted Van Niekerk after his 56th not gone out.

“It wasn’t like The Hundred’s first game, it was like something that had been there all the time. It was an amazing experience and I hope people come for all the games and enjoy the tournament for what it is, really fun. “

Although this is a new format and overs are no longer needed, with a different scoreboard from Test, One Day Cricket and Twenty20, the end result is largely the same – the team with the most points wins.

Former Surrey Stars ace Van Niekerk added: “I’ve played here before, but it was definitely the biggest crowd I’ve played in front of at the Oval and shows people are interested in it. tournament.

“Like I said in some interviews before, it’s still cricket, just the game is a little faster, but 100 balls is still 100 balls so I hope everyone had as much fun as we.”