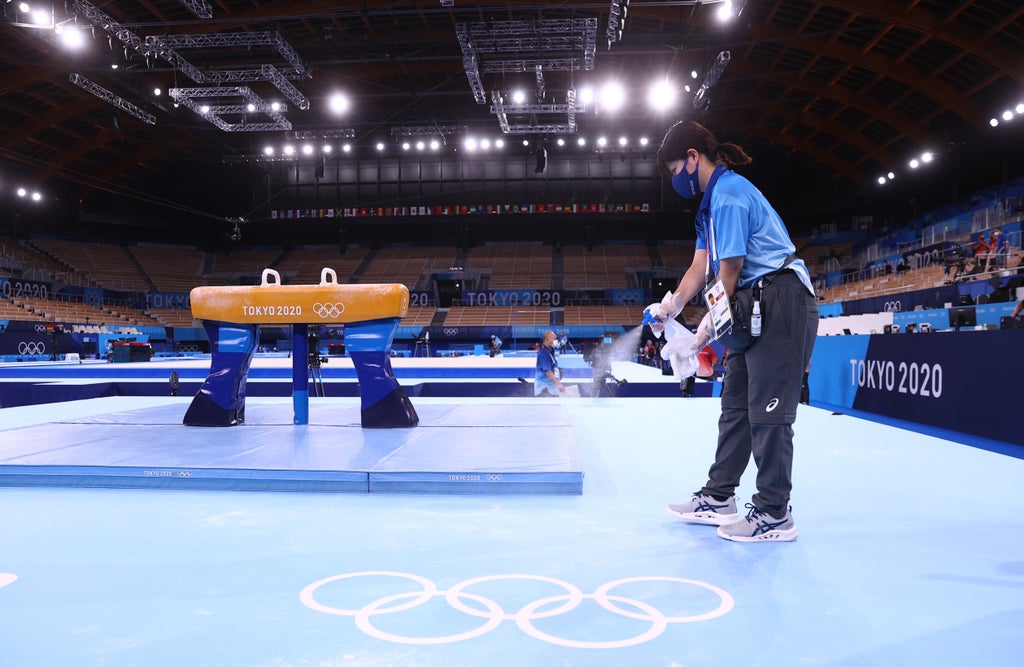 To be in Tokyo this week is to operate in a state of perpetual quarantine. Or a real quarantine like one of the thousands of media arriving on Monday or Tuesday. If, like many, it’s your first trip to Japan, getting around the city feels like that specific privilege of getting lost in a game show. Happy to be there but saddened by the loss of what you could have won.

Even the little that you see on the outside speaks in a distinct way of being. There is a familiarity of the streets and architecture that suddenly takes a figurative left turn in the alternate approach in these parts. The Bunkyo City district, for example, passes winding side streets to the Tokyo Dome City amusement park. And once the fear is gone, you are left to think, “sure, why not?” Why shouldn’t a city have an amusement park in the middle of its crowd? A slide on the side of the Shard, a roller coaster wrapped around the Eiffel Tower.

That’s one of the great Japanese qualities: taking something, making it your own, and turning it into something truly unique that works just as well. Town planning is one of them. Perhaps the Neapolitan pizza is another – an unrivaled food for the keepers and yet the local establishments here have obtained the approval and the laudatory accreditations of the institutions of Naples to maintain the tradition by the adaptation.

So the great shame is that we won’t really see how Tokyo would have given us its unique touch at these Olympics. The keys to make it your own, the wider lines to present the best of Japan to the visitors who were supposed to be here by millions of curious people.

There are still shards of what could have been, even with rampant Covid-19. The little hospitality we received has been generously warm. Any sense of civil unrest is not visible on the outside, although this may be due in part to the general public knowing that those walking the streets look lost in cords (and a little sweaty) are the least to blame for the current situation.

“Public opinion in Japan is neither uniformly opposed or enthusiastic about the Tokyo Games,” said Yuki Shiraito, assistant professor of political science at the University of Michigan. “A recent opinion poll shows that while 30% of those polled want the Games to be canceled, 39% say it is okay for the event to take place without spectators and 26% want the organizer to leave at least a few spectators enter. . “

As with any poll, the framing of the questions is worth considering, especially with regard to the Olympics which, even in 2013, encountered general ambivalence. “Perhaps this is because voters generally do not have strong and consistent preferences on this issue, as they do with many other specific political issues,” Shiraito said. The independent. “On the other hand, broader attitudes towards the government’s handling of the Covid situation in Japan have been consistently negative since the start of the pandemic.”

That sense of shrug and sadness underpinned Wednesday’s action at Fukushima Azuma Baseball Stadium. Part of the healing process after the Fukushima nuclear power plant disaster in 2011, when an earthquake and tsunami caused radiation to leak, was an opener between Japan and Australia in front of pits crowded. An 8-1 home win was the only solace, marked by the kind of empty silence the zone hoped would be a thing of the past.

The most disheartening aspect is never having the games necessary to dive into the warm sanctuary of a bottomless sports pool. This daily festival of notable stars punctuated by unfamiliar names blossoming in obscure activities to attract attention. Or at least deflect attention from the fourth coronavirus state of emergency in Japan or the countless address statements from IOC dignitaries and associates who insist on lining the pockets of the dead space right now with their own agendas and their ignoring.

Much like Twitter’s unspoken rule of making sure you’re not the main story on any given day, this week should provide us with a full set of clowns. Thursday’s gong was sealed by Australian Olympic Committee President John Coates when he ordered Queensland Premier Annastacia Palaszczuk to attend Friday’s opening ceremony at a conference of press live on Wednesday celebrating Brisbane’s confirmation as host of 2032.

Palaszczuk’s mistrust was like most of those in Tokyo and the rest of the world, whose ambitions were tamed by Covid-19. Her overseas drew derision from home, and her reluctance to show her face on Friday speaks volumes about her sensitivity to the issue, even though she has already made the longest part of the trip. Coates’ behavior was more in line with the trend outlined by Olympic officials this week, starting in earnest with IOC President Thomas Bach, who attended a reception in Tokyo on Sunday night.

If such cheeky contempt is not the legacy of these games, a lot of heavy lifting, running and jumping of its most important components is required. Although athletes continue to fight their own distracting battles, such as keeping their safe spaces safe. On Wednesday, 12 more positive cases of Covid-19 were confirmed – including two athletes in the village – bringing the total number of positives among Olympic staff to 91 since July 1.

Many others identified as close contacts found the already restricted preparations to be further hampered. Those here are, above all, desperate to get started as soon as possible. Their nature is to always believe, and all of their robotic preparations on the fine-tuning, shape, and adjusted trope of such an opportunity five years to come has been heartwarming.

Whether it will be worth it is a whole other question. And finding the answer doesn’t require a lot of soul searching. The toll he inflicted on such a welcoming nation is sufficient argument.

The prevailing feeling is that it will be generations before another Japanese city makes an offer for the games. The country’s politicians’ sense of betrayal of the IOC has been exacerbated by the plunge in public opinion. Rarely have the drawbacks of hosting the Olympic Games or the IOC’s intentions been so exposed. What Japanese officials have experienced in the past 12 months since the first suspension has far exceeded any political capital gained when Tokyo’s name was announced eight years ago.

This optimism belongs to another era and to a much simpler world. Here, in this one Friday, the opening ceremony will bring with it a sense of relief. That by starting “officially”, we are getting a little closer to the end.

The only assurance is soon, the games will be handed over to its competitors. Those who appreciate it the most: what it represents and how nourishing it can be, even in these times of great advancement. Those of us who have invested yet must hold on to our optimism. The next 19 days will only be worth their achievements.

UK to ban online racists from gambling after Euro 2020 outcry