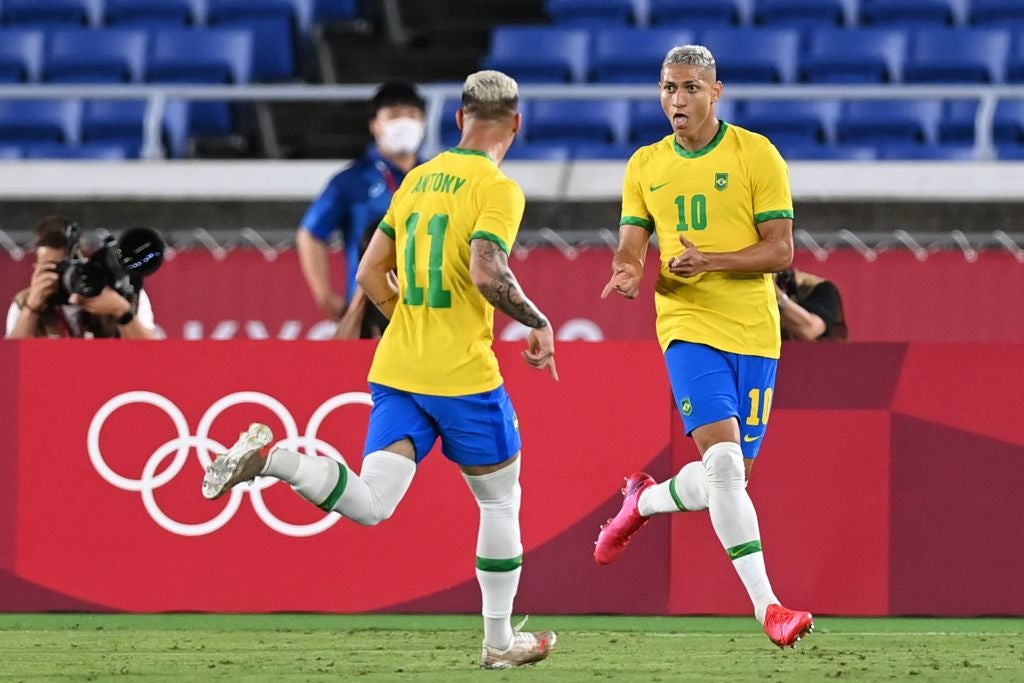 Brazil have signaled their intention – and most importantly their ability – to retain the Olympic gold in men’s football with an impressive 4-2 victory over Germany on Thursday.

Five years ago in Rio, these two teams met in the final and it took a penalty shootout to separate them; here in Yokohama there was an absolute gulf between them in terms of quality, despite the score which sort of seemed like a pretty close affair.

In truth, the game was over at 30 minutes and the Seleçao Olympic contingent could have been five or six by that point – instead it was “only” 3-0, Richarlison scoring them all. .

Before the break, Matheus Cunha, one of the game’s most notable players, saw a penalty kick stopped and he, Richarlison and Antony could all have found their way to the net at least once more each as a German defense tattered was repeatedly cut.

The changes during the break and in the second half, combined with Brazil’s continued profligacy, actually saw Germany close the gap despite a red card for captain and over-aged player Max Arnold, with Nadiem Amiri finishing on the edge of surface and Ragnar Ache heading towards a late second.

However, after Cunha missed another big chance and Brazil missed three late counterattacking opportunities to score a fourth, Paulinho finally wrapped up the win with a lavish stoppage curler to add some realism. to score.

Andre Jardine might have some worries about how many chances his Brazil side rejected in a game in which they have been totally dominant for long stretches, but it will be little more than a coach’s pursuit of perfectionism. .

More generally, the movement-and-tie game in the final third was of an utterly intimidating nature for any defense that should come up against them – with Saudi Arabia and Cote d’Ivoire the other teams in the group D.

And while this is only the first game of six if they plan to go all the way and emulate Neymar, Marquinhos and Co, there were few visible flaws – apart from the stray finish – to give an indication of how rivals might upset them. , even taking into account the fact of conceding twice.

As for Germany, Stefan Kuntz already has to consider the reset button for the remaining group matches, with a fragile and unbalanced defensive setup from the kick-off – and his skipper now suspended after being sent off.

Amos Pieper and Benjamin Henrichs have been continuously exposed and overloaded on the right side of the pitch and there is little room for error now if they are to reach knockouts, with a game up for grabs against Saudi Arabia next.

Elsewhere, there were several surprise results at the start of the men’s soccer tournament and none of Spain, France or Argentina won their matches.

Despite the roster of a six-player squad who regularly took part in Euro 2020, Spain were held to a 0-0 check by Egypt in the opener.

The Spanish cause was not helped by the first half injuries of right-back Oscar Mingueza and central midfielder Dani Ceballos.

France’s original Olympic team had to be heavily reshuffled after some clubs refused to call up their players, and the resulting squad did not shine as they lost 4-1 to Mexico, the Veteran striker Andre-Pierre Gignac scored consolation from the penalty spot.

There was success for the Southern Hemisphere as Burnley striker Chris Wood claimed New Zealand’s 1-0 victory over South Korea, and Australia shocked Argentina with a victory. 2-0 – Francisco Ortega being sent off just before halftime for the South Americans.

Host Japan started with a 1-0 victory over South Africa thanks to a goal from Real Madrid star Takefusa Kubo, while Romania beat Honduras by the same score.

And in the same group as Brazil’s convincing victory over Germany, Cote d’Ivoire took 2-1 casualties against Saudi Arabia, with AC Milan’s Franck Kessie hitting the winner to spark an intriguing clash. in the next round of games against the reigning gold medalists.

Who is Tokyo’s most decorated Olympic swimmer? Emma McKeon from Australia.