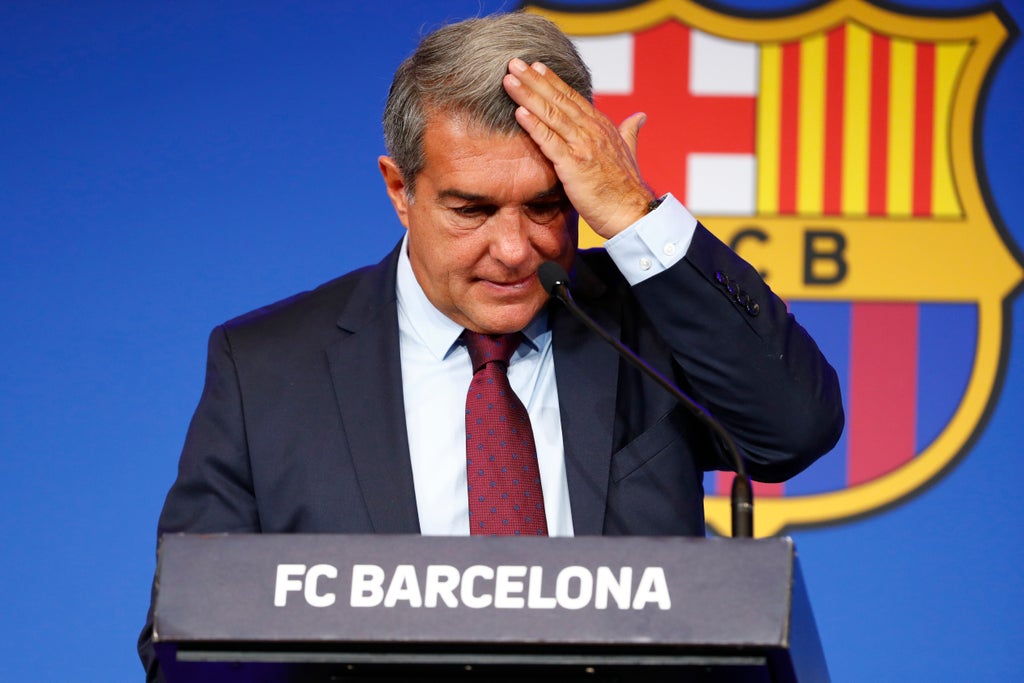 Barcelona president Joan Laporta has opened up about the club’s ‘very worrying’ financial situation, revealing that the La Liga giants have a debt of 1.35 billion euros (£ 115b).

Laporta blamed his predecessor Josep Bartomeu for a “terrible legacy” which he says sees club salaries amounting to 103% of Camp Nou’s income.

He revealed that Lionel Messi’s new contract would have taken the payroll for 110% of the club’s annual income – a figure La Liga have not accepted.

Laporta blamed the club’s “dire” situation for Messi’s departure to Paris St Germain last week and accused Bartomeu’s regime of countless “lies”, insisting that he and his board must be held accountable.

Laporta, in his second term as club president after being re-elected earlier this year, told a press conference: “Our salaries represent 103% of the club’s total income. That’s 20 to 25% more than our competitors.

“The first thing we had to do when we arrived was to ask for a loan of 80 million euros because otherwise we would not be able to pay the salaries. The previous regime was full of lies.

“We also found that we had to make urgent repairs at Camp Nou because otherwise it was a risk for the fans present. We also discovered that the club had already collected 50% of the TV rights in advance.

“We found the wage policy in the form of what experts call an inverted pyramid – veterans with long contracts and young people with short contracts. There were no pay cuts – lies.

“We found that disproportionate payments were made to intermediaries, not even agents.

“Barcelona have a negative net worth of € 451million – that’s a terrible legacy. What happened is very worrying.

“Bartomeu’s (open) letter is an effort to justify unjustifiable management. It is an exercise in desperation. They are responsible for everything until March 7. They will not escape it.”

However, despite Messi’s departure, the club were only able to save the pair with late notice ahead of their win over Real Sociedad on Sunday after captain Gerard Pique agreed to cut his salary.

“I thank Piqué for his willingness to help the club. Its reduction has helped us register players. We can register Kun (Sergio Aguero) with the agreement that we plan to have with the other players. I hope the other captains will act like Pique, ”said Laporta.

Despite such a multitude of problems, Laporta believes Barcelona can fix the situation and has revealed that he has taken out a loan of “550million euros at an interest rate of 1.1% to restructure the club”.

He believes it will take a few years for the club to regain a more stable financial base.

“The situation is dire, but we have good news,” Laporta said. “The strategic plan based on our credibility and our experience, on Barça’s strengths, makes this situation temporary. I think that in a few years the club’s economy will be healthy.

“We are not at all afraid. We are very motivated and positive and morale is good. It is a big challenge but we are able to overcome it.

“I would like to call on all Barca fans and the whole club to be united. With football and unity, I have no doubts that these times will be full of success.”

Sagan and Haig retire from Olympic road race with injuries