Demba Ba bows out. The former Senegalese international has just announced the end of his career. A decision that he has just formalized on social networks. The former Chelsea player (36) has come to an end to a very rich career.

The native of Sèvres has had prestigious clubs, and moments of glory. The ex-Newcastle confides in his 16 years as a professional. “An incredible source of experience, it was for me to take part in this adventure “. He also explains being ” filled with gratitude “

Demba Ba thus had a great career, with a few highlights. We remember of course his goal in the 87th minute against PSG, in the back quarter-final of the Champions League during the 2013/2014 season. An achievement synonymous with qualifying in half for the blues.

Demba Ba has known several clubs in his career. After his training, he started as a professional in Rouen in France, he joined Belgium and the Excelsior Mouscron. He then joined Hoffenheim in Germany. His talent thus begins to jump in the eyes. He joins the Premier League and West Ham. His debut is successful with 7 goals in 12 league games and joins Newcastle. He forms a very good duo with his compatriot Papis Cissé. He spent two years (from 2011 to 2013) in the North of England and played 54 matches there, for 29 goals scored.

Demba Ba held the looks of a bigger English club. This is Chelsea. He signed there on January 3, 2013. His debuts were wonderful as he scored a brace for his very first match, two days after his signing. After Chelsea, Demba Ba knows several clubs, notably in Turkey with Beşiktaş, Göztepe and Başakşehir. Before that, he had played in China with Shanghai Shenhua.

During the year 2021, he signed in Lugano in Switzerland, but only played three games there. He even terminates his contract.

Mixed career with the Senegalese selection 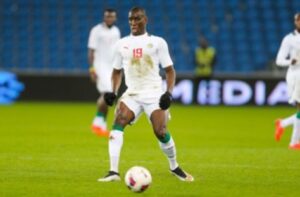 Demba Ba in the jersey of Senegal

Demba Ba knows his first selection with Senegal on June 2, 2007. Senegal faces Tanzania on behalf of qualifying for CAN 2008. The native of Sèvres scores for his debut. Corn the romance will not go as planned. The most important thing to do is to convene the CAN in Egypt in 2008. During the CAN 2012, Demba was part of the famous fire attack of the the Lions, with among others Moussa Sow, Mamadou Niang, Papis Demba Cissé.

But again, it is a fiasco with an elimination in the first round. Three defeats in three games by the same score (2-1) against Zambia, Equatorial Guinea and Libya. It will also be his one and only Africa Cup.

With the Senegalese national team, Demba Ba has a record of 22 selections for 4 goals.