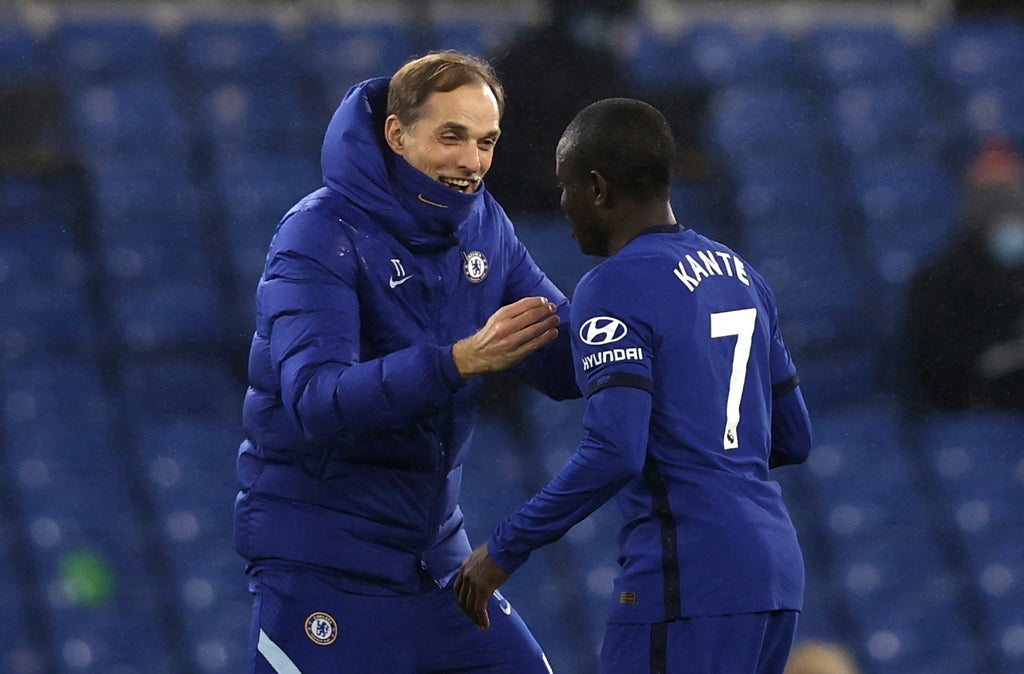 Chelsea boss Thomas Tuchel says he can’t believe how good N’Golo Kante is after the Frenchman inspired Chelsea to a 3-0 victory at Tottenham.

After being unhappy with what he saw in the first half in north London, Tuchel sent Kante out at half time and it paid immediate dividends as Chelsea scored two goals in the first 12 minutes of the second half.

Kante scored the second, after Thiago Silva’s opener, and Antonio Rudiger added a third in added time as Chelsea finished the weekend at the top of the Premier League.

“Best player, if you have N’Golo you have something that everyone is looking for,” Tuchel said. “You’ve got everything you need in midfield, you’ve got work pace, intensity, ball wins, skillful play, dribbling, half-court practice and even a goal.

“I see him in training every day and it’s hard to believe how good he is. He’s a unique guy, there are no more words from me. N’Golo is N’Golo, he is fantastic. “

Spurs, who were mourning the death of record scorer Jimmy Greaves, played with a lot of energy in the first half and Tuchel didn’t like what he saw from his side.

“We didn’t change the system, but maybe that was the main thing, it looks like we changed the system, we played the system with more conviction, with more energy, more quality, more precise, ”he said.

“It was just too sloppy, not sharp enough, we only relied on our skillful play in the first half, I felt like we forgot to bring the right attitude and the right energy to this match.

“As a team we allowed too many chances, way too many ball losses and we felt every 50-50 match was going against us. It had to change.

“If you have N’Golo on the bench and you want to progress in those playing models, he’s the best player to bring in because he’s unique and can change any swing.

“It seemed to come from the characteristics of going a little more defensive, but we wanted to improve our compactness, our ball gains, our team spirit and have a higher intensity and pace of work in our game, then build on Our skills.

“I’m happy with the reaction, it was absolutely necessary and we played a very good half-time to earn our victory.”

Tottenham are a million miles away from the squad Greaves was an endemic goalscorer in the 1960s and even further away from the one that reached the Champions League final just over two years ago.

After winning their first three games under new boss Nuno Espirito Santo, things are starting to take a turn for the worse with a second straight 3-0 loss in the league.

They looked brilliant in the first half, but couldn’t find the breakthrough and couldn’t recover from Silva’s opener in the 49th minute, which came from a set piece.

Nuno said: “I think the change of game was a set piece, after that it became very difficult for us to get back into the game.

“The goal that we conceded, we started chasing a result and with the quality of the players that Chelsea have, they create problems, straight balls, which run behind and that is the main reason.

“We’re going to analyze, there’s a lot we have to look at, but the first impression is the way we conceded really punished us after all the energy we put in in the first half.

“We have to find solutions. From the start, our goal has been to find solutions that can help players perform. To find partnerships. We started off one-sided at the start of the season because those were the players you could lean on.

“The international break came and we had problems. Now I honestly believe the first half was really good, really good. The energy we put on the pitch – the attitude, the spirit of the players. So if there is only one positive today, it was the first half. “

Photos and videos: Drew McIntyre returns to Glasgow with WWE for big comeback

Inquirer presents the Olympics to the public via the widest platforms