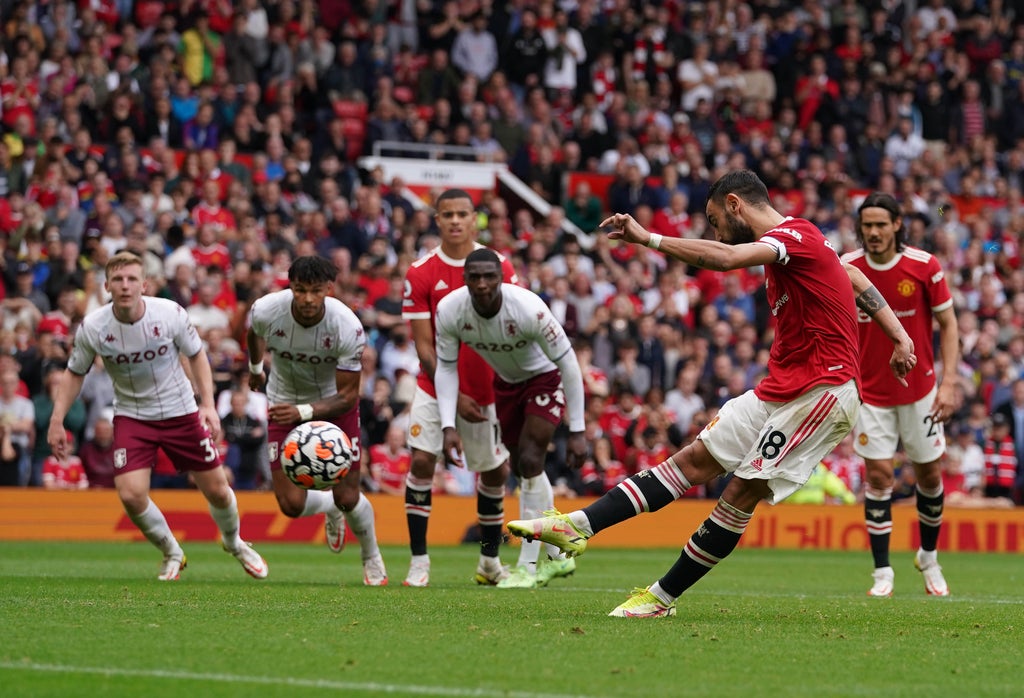 Home defender Kortney gave Villa the lead in the 88th minute with a close header just to handle the ball moments later, giving United the chance to save a point.

But Fernandes, who had scored 21 of his previous 22 penalties for United, sent the ball high over the bar as Cristiano Ronaldo watched.

Villa held their own for a 1-0 win, giving United their second loss of the week at Old Trafford – after a Carabao Cup loss to West Ham – and a third in four games.

Solskjaer was annoyed by Villa players’ reaction to the decision – including goalkeeper Emi Martinez apparently suggesting Ronaldo should take the penalty – but backed Fernandes and declined to say if Ronaldo might have the opportunity next time around that United will be awarded a free kick.

He said, “Sometimes that just doesn’t work out for you. Bruno is such a good penalty taker and today you would have backed him up with your mortgage I guess.

“What I didn’t like was the way they cluttered the referee and the penalty spot and Bruno and tried to affect him. It clearly worked but it’s not great to see.

“Bruno was excellent and Cristiano is probably the one who has scored the most penalties in world football. We have great takers and this is a missed opportunity for us to score a point. “

There were opportunities for both teams in an open game, but Villa certainly deserved at least a point, with Matt Targett and Ollie Watkins having excellent scoring chances as well. United’s closest after the penalty was a Paul Pogba header just before half-time that took off.

Solskjaer said: “When we came to the final decision, the final execution, the quality of the pass or the shot or the decision was not good enough to score goals.”

The United boss has argued that the home goal should not have been held up due to Watkins’ positioning.

“You see again the inconsistencies with VAR and the decision making,” he said. “Watkins touches David [de Gea] for the head has entered. It’s offside or it’s a foul.

“The linesman did well, they called him in VAR but they turned him down and it was again a goal so bad decisions unfortunately.

“We should have slowed the game down at times. We didn’t have enough control even though we had 60% possession and 30 shots or whatever. “

Solskjaer, meanwhile, has to eagerly await the results of the scans from England defenders Luke Shaw and Harry Maguire, both of whom have been forced out due to injuries.

It was Villa’s first win over United since 2009 and only their second at Old Trafford since 1983, making it a very big day for manager Dean Smith.

He said: “As everyone knows we have suffered tremendously as Villa fans at this stadium, but I think we’ve been close for the past two years. People are going to watch it and say it’s a big win but for me it’s more of a big performance.

“I thought we deserved the win. I thought we had the greatest chances. We were aggressive in the way we played against a group of Ronaldo, Pogba, Fernandes and Greenwood.

“There are a lot of beliefs. I felt we had recruited well since Jack [Grealish] is gone and the performance levels have been there. We had an indifferent start, but there were reasons for it. “

Hakuho and Terunofuji survive fear to stay perfect on day 4