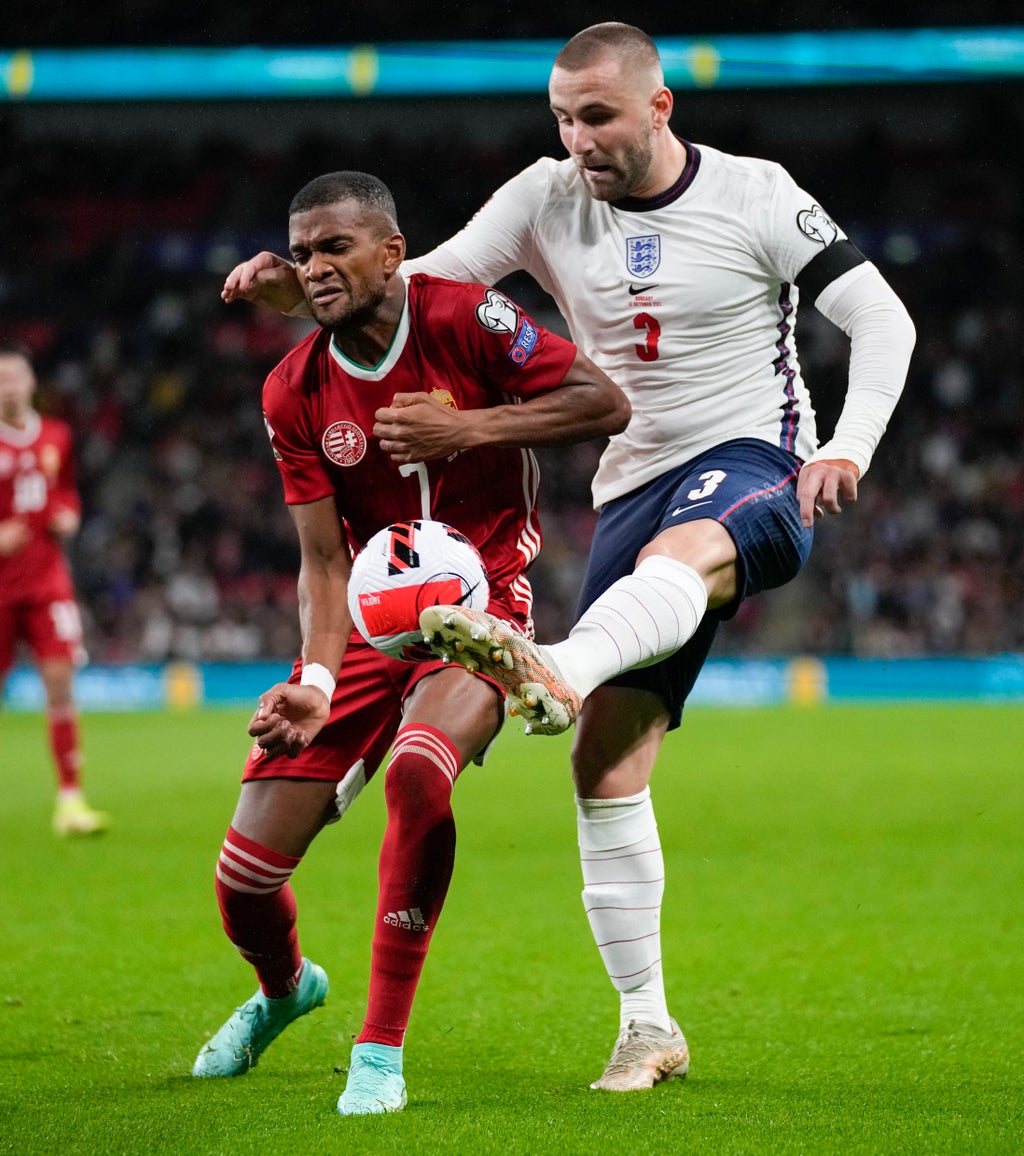 Luke Shaw insists England will come back better next month after a poor performance against Hungary – full-back lamenting the ‘soft’ penalty he conceded in the 1-1 draw.

The Three Lions remain on track to qualify for the 2022 World Cup, needing four points in their last two Group I games to confirm their place in Qatar.

Both matches will come next month when Albania travel to Wembley on November 12 before Gareth Southgate’s side face the San Marino minnows three days later.

While the failure to qualify is still unthinkable, it would have been almost assured if England had knocked out Hungary.

The match had previously been marred by clashes between a number of Hungarian fans and the police after a steward was the victim of racist abuse.

England haven’t hit recent highs on the pitch, but Shaw believes the display review can help make improvements next time around.

“Of course I think we still have control of the squad,” he told beIN Sports. “We said that (in the locker room) it’s still in our hands and we’re confident we can do it. We want to be in the biggest competition in world football and that is our main goal.

“It’s a poor performance over a lot and we’re going to think it over, watch it and come back next month a lot, a lot better.

“I think it was disappointing because the high standards we usually set weren’t there tonight, it was a disappointing performance and we gave them way too much control and confidence to build and play with the ball. .

“We weren’t aggressive enough to try to stop them, we weren’t usually ourselves but we have to learn from it, think about it. We still control the group so it’s in our hands. “

John Stones earned England a share of the booty after Roland Sallai opened the scoring from the penalty spot, as Shaw felt he fouled Loic Nego after catching him with a high boot.

Manchester United left-back was not happy with the call and claimed Nego’s reaction to the challenge had deceived referee Alejandro Hernandez.

“For me it’s sweet,” he said of the penalty.

“I don’t know what else I can do in this situation, I was clearly the first on the ball and cleared the ball.

“It looked like he wasn’t even going to get the ball, I think he just knew my foot was a little high, so he just dove at my foot and turned around like he was touch.

“This is what happens with the referees, they see him rolling while holding his head and of course he will give a penalty.

“I think, especially in games like this, maybe the referee needs to leave him, go to VAR and get a good look.

“Once the penalty is given, he will never cancel it, the slightest contact was there, but I don’t understand what I’m supposed to do when the ball is there and I’m the first.

“He just dove, not for the ball but clearly to roll and do that. He got what he wanted and it’s disappointing from the referee, that’s my opinion and I think he was wrong.

“But that doesn’t define the night, of course, it’s kind of that, but overall we weren’t good enough.