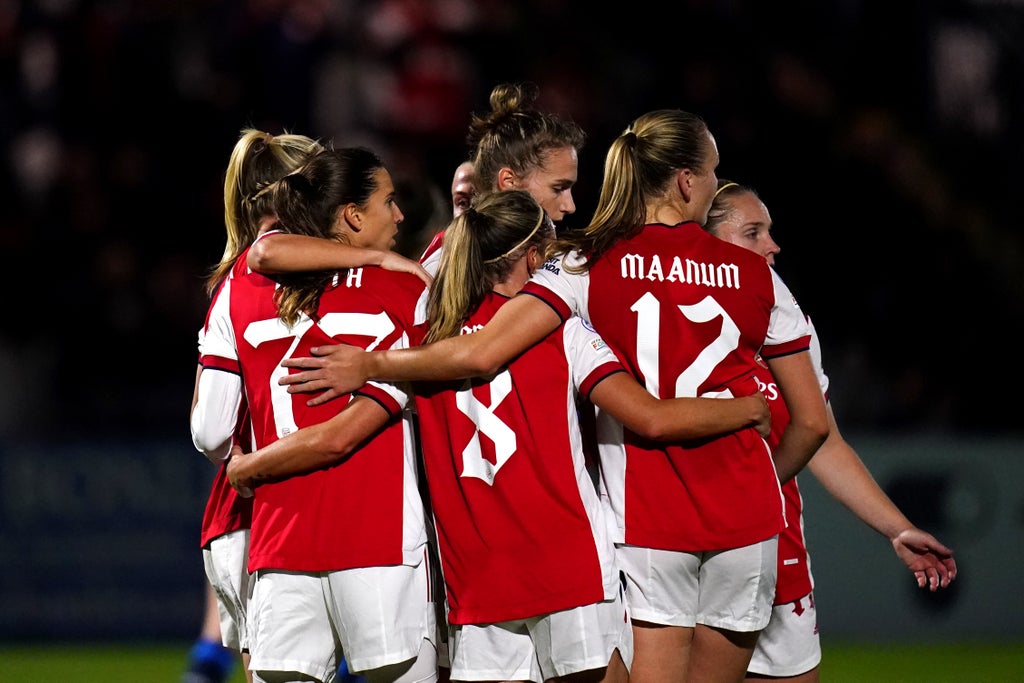 Arsenal claimed their first victory in the group stage of the Women’s Champions League, beating Hoffenheim 4-0 at Meadow Park.

Following their 4-1 defeat to Barcelona in their Group C opener, goals from Kim Little, Tobin Heath, Vivianne Miedema and Leah Williamson gave the Gunners a comfortable victory that puts them level on points with their German opponents in the standings.

Little and Heath found their way into the net before half-time, before Miedema and Williamson completed the scoring in the second half, although Hoffenheim themselves had plenty of chances.

Nicole Billa shot wide on the turn as Arsenal failed to clear their lines in a nervous moment in the third minute, before Tine De Caigny flew just over the edge of the box.

Arsenal’s breakthrough came when they got a penalty kick after Michaela Specht was deemed to have caught Beth Mead with a high boot in the 21st minute.

Captain Little sent goalkeeper Martina Tufekovic the wrong way to give Arsenal the advantage with a low shot.

The hosts withstood further pressure from Hoffenheim before Miedema passed up the opportunity to shoot on goal from a promising position in favor of Mead’s equalizer, but the move came to naught.

Arsenal doubled their advantage on the stroke of half-time, however, when a neat pass saw the ball played left to Katie McCabe, who swung a cross which was directed by Miedema for unmarked Heath to coolly find the net up close. range.

The Gunners continued to press after the break and were rewarded with a third goal seven minutes into the second half.

Tufekovic brilliantly managed to prevent Jordan Nobbs’ curling effort from the edge of the box, but she couldn’t keep the ball, which fell on Miedema for a simple finish.

Sarai Linder headed for Hoffenheim as Hoffenheim wasted a good opportunity to cut back arrears shortly after the hour, before Arsenal goalkeeper Manuela Zinsberger knocked down a deflected Jule Brand strike and McCabe cleared the line with a header by Linder.

But Arsenal put the result beyond doubt when Williamson scored a header at the post near a corner four minutes from time.