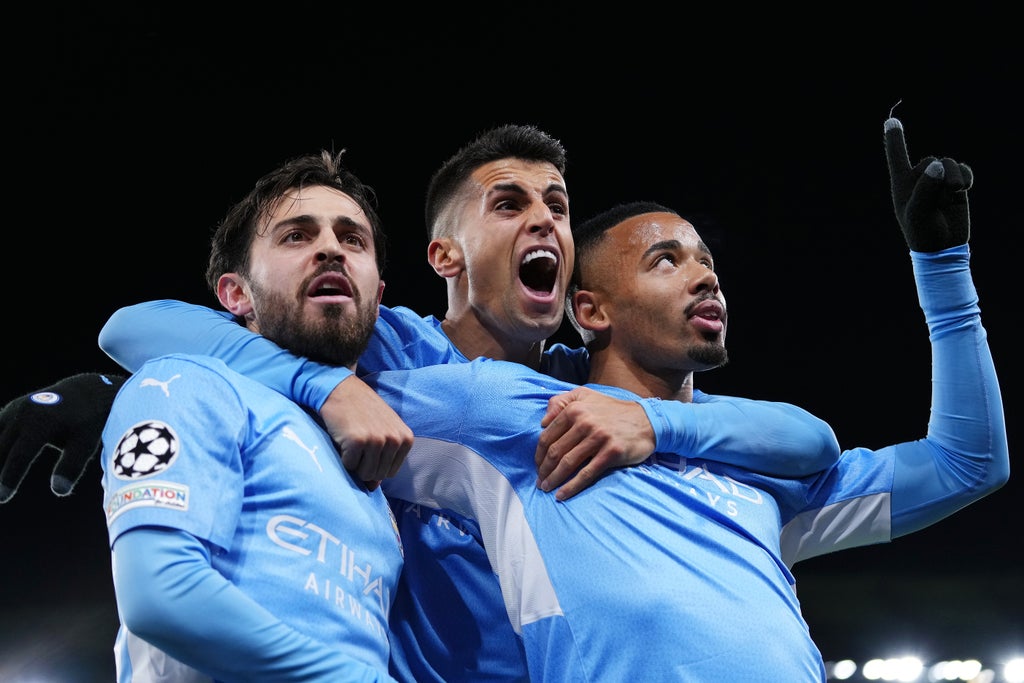 Manchester City fired back in the final half hour to beat Paris Saint-Germain 2-1 and seal first place in Group A of the Champions League.

Raheem Sterling and Gabriel Jesus’ goals were no more than City deserved after dominating much of the game without reward, repeatedly denied by PSG’s latest defense. Kylian Mbappe’s goal at the break put PSG ahead at the start of the second half, but they couldn’t keep it up.

Here’s how each player rated.

Ederson, 5: He had very little to do but will think he could have done better with Mbappe’s goal slipping between his legs.

Kyle Walker, 6 years old: His pace of recovery was important in fending off Kylian Mbappe when he scored at the end of the first half.

Ruben Dias, 7 years old: An excellent tackle to stop Messi in the second half.

John Stones, 5: Caught the ball in the first half and almost punished for it.

Joao Cancelo, 6 years old: Did one of his brilliant passes with the outside right foot, but generally not as creative as he has been in recent weeks.

Rodri, 7 years old: Controlled the tempo in midfield, although he was helped by the fact that PSG’s top three were reluctant to disrupt him. Reserved for a lung on Leandro Paredes.

Oleksandr Zinchenko, 5: Quite careful work out of position in midfield but sacrificed at the start of the second half as Pep Guardiola continued the game.

Ilkay Gundogan, 6: Typically tidy on the ball. Could have and probably should have scored in the first half, instead of hitting the post.

Bernardo Silva, 8 years old: Consistently brilliant, especially with his runs below the signing that put City behind. A beautifully skillful touch to set Gabriel Jesus up for City’s winning goal.

Raheem Sterling, 7 years old: Rarely caused problems for Achraf Hakimi and his wild shot late in the first half summed up a lack of conviction in his game, but was in the right place at the right time – as he so often is – to score the equalizer crucial to City.

Riyad Mahrez, 7 years old: Dangerous when he cut the inside of his left foot and almost scored the first goal early in the first half. His precise cross at the far post played a key role in City’s winner.

Keylor Navas, 7 years old: Important first-half saves kept PSG in a game they could have let slip away much sooner than they did.

Achraf Hakimi, 6 years old: Kept Raheem Sterling relatively quiet until his goal, but didn’t offer as much as he could for the future just because he rarely got the chance.

Presnel Kimpembe, 6: One of the many players to make a crucial block in the first half.

Marquinhos, 6 years old: Another vital block has helped keep City on the sidelines during this period of home side domination.

Nuno Mendes, 6: His soaring run sparked the opening for PSG, but he struggled to contain the movement of Riyad Mahrez and Bernardo Silva at the other end – admittedly without much support from his winger up front.

Ander Herrera, 5: Busy and covered a lot of ground in a three-way midfielder constantly dragged across the pitch.

Idrissa Gueye, 5: Substituted in the middle of the second half.

Leandro Paredes, 7 years old: One of PSG’s best players, working hard in midfield and using the ball well when he occasionally retrieves it.

Lionel Messi, 6 years old: Almost anonymous in the first half but more lively after the break, he played an important role in the making of PSG’s first goal.

Kylian Mbappé, 7 years old: Missed a glorious scoring opportunity on the break in the first half, folding his shot over the crossbar, but made no mistakes early in the second, scoring a finish between Ederson’s legs.

Neymar, 5: Had moments of great skill but never carried much threat and missed a big opportunity late in the day0. Worked the hardest of the top three Parisians, but that doesn’t mean much.