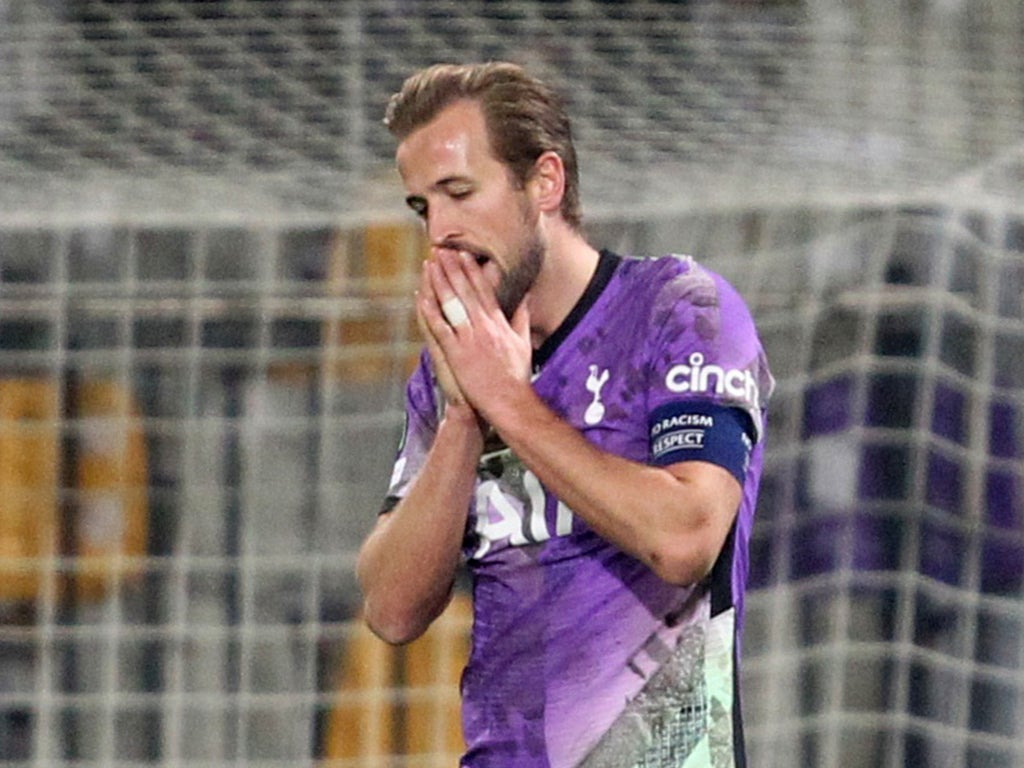 Tottenham Hotspur forward Harry Kane has said his side need to “improve everything” after being humiliated in the Europa Conference League.

Spurs were beaten 2-1 by NS Mura, the 341st ranked team in Europe on a humiliating evening where new boss Antonio Conte made his thoughts clear on the state of the squad.

Not only did Spurs – 2019 Champions League finalists – have the embarrassment of having to compete in third tier competition, but even winning their last group game against Rennes in a fortnight might not be enough for them to qualify for the round of 16.

Kane knows there is a lot of hard work to be done to get Spurs up to the level they were a few seasons ago.

When asked what they needed to improve, the English captain replied: “Everything. We work hard and train hard, the manager only had a few weeks, every day we learn new things, it’s about getting that spirit and unity.

“We work hard every day, we had a good win this weekend (against Leeds), it’s a shame we couldn’t support that but we have yet another game in the squad to play. let’s give it our all in the last group game. “

Tottenham were already lagging behind for the opening shock of Tomi Horvat when Ryan Sessegnon was sent off.

Kane equalized for all 10 with 18 minutes remaining and pushed for a winner, but Amadej Marosa scored with the last kick of the game to inflict the defeat on Spurs.

“It was really unacceptable,” Kane added. “We didn’t start well, we fell behind, then we got down to 10 men and we made it difficult for ourselves.

“In the second half we showed combat and wit and got back into the game and if anyone looked like it was scoring it would be us.

“But an immature error at the end to concede a goal when we had all the play. It’s unacceptable. A tough game for us, we just have to learn from it.

“This one hurts, but we have to dust ourselves off and prepare for this one.”

“Anger, disappointment. As it should be, we were favorites to win this game, but we knew we had to get it right.

“We knew they were a good team, we knew we had to be in all aspects and the mentality was definitely the main thing. We made immature mistakes and got punished for them and that’s what happens in Europe.

“All we can say is sorry for the traveling fans, sorry for the fans at home, but we just need to keep working hard and making a difference.”

It was a particularly disappointing evening for Sessegnon, who only lasted 32 minutes before seeing red for two yellow cards.

The pre-match story had explained how it was a chance for the England Under-21 international to expose his case and launch his Spurs career.

Kane supported the winger to get good.

“He’s young and hasn’t played too many European games,” Kane added. “The referees are different, the atmosphere is different.

“He is devastated but he is a young child and he will certainly learn from it.

“It’s about getting around and helping each other. He’s worked really hard, he’s going to bounce back and will be available for us and I’m sure the next time he takes the pitch he’ll do anything to help us. “

Betting on Trevor Bauer is not the Dodger way